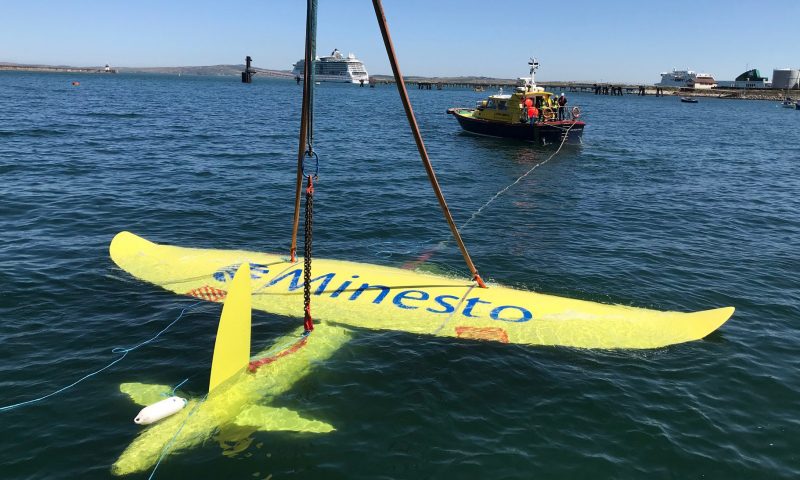 Minesto’s microgrid power plant Dragon 4 (100 kW) has produced record-levels of electricity in October and November. A second foundation will now be installed, to run a mini array with two Dragon 4 units operating in parallel. The development of Minesto’s utility-scale power plant Dragon 12 (1.2 MW) is also making significant progress. Installation of the Dragon 12 is now scheduled for spring 2023.

Since its successful commissioning in September, the second Dragon 4 unit has been producing electricity throughout October and November, and has delivered record-breaking results in terms of total electricity generated, peak performance, and energy conversion at large. To enable a mini array of both systems in parallel, a second foundation is to be installed as soon as weather conditions allow. The installation of the second site infrastructure is expected to be in December.

Development of the Dragon 12 is making significant progress. Despite extended lead times for certain components, factory acceptance testing of critical subsystems is ongoing with several of the tests completed. The installation of the Dragon 12 is now scheduled for spring 2023.

“The long-term project goals remain intact and the Hestfjord 30MW array project is progressing according to plan. The fact that the Dragon 4 has proven itself creates real confidence in our work that is brought into the upscaled version Dragon 12,” says Dr Martin Edlund, CEO of Minesto.

Minesto is a leading marine energy technology company with the mission to minimise the global carbon footprint of the energy industry by enabling plannable commercial power production from the ocean.

With more than €40 million of awarded funding from the European Regional Development Fund through the Welsh European Funding Office, European Innovation Council and InnoEnergy, Minesto is the European Union’s largest investment in marine energy to date.

Minesto was founded in 2007 and has operations in Sweden, the Faroe Islands, Wales, Northern Ireland and Taiwan. The major shareholders in Minesto are BGA Invest and Corespring New Technology. The Minesto share (MINEST) is traded on Nasdaq First North Growth Market. Certified Adviser is G&W Fondkommission, email: ca@gwkapital.se, telephone: +46 8 503 000 50.

Read more about Minesto at www.minesto.com

Press images and other media material is available for download via bit.ly/Minesto_media.

Financial information including reports, prospectuses and company descriptions is available in Swedish at www.minesto.com/investor.