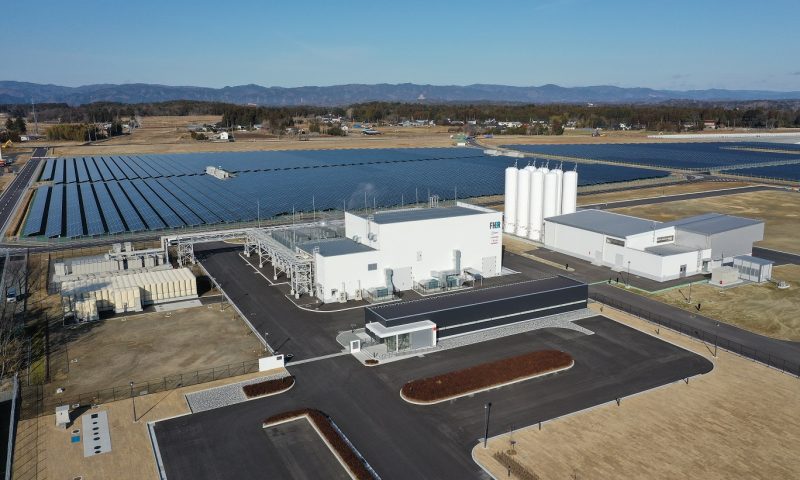 The New Energy and Industrial Technology Development Organization (NEDO), Toshiba Energy Systems & Solutions Corporation (Toshiba ESS), Tohoku Electric Power Co., Inc., and Iwatani Corporation announced that Fukushima Hydrogen Energy Research Field (FH2R), which had been under construction in Namie town, Fukushima Prefecture since 2018, has been constructed with a renewable energy-powered 10MW-class hydrogen production unit, the largest-class in the world, at the end of February.

FH2R can produce as much as 1,200 Nm3 of hydrogen per hour (rated power operation) using renewable energy. Renewable energy output is subject to large fluctuations, so FH2R will adjust to supply and demand in the power grid in order to maximize utilization of this energy while establishing low-cost, Green hydrogen production technology.

Hydrogen produced at FH2R will also be used to power stationary hydrogen fuel cell systems and to provide for the mobility devices, fuel cell cars and buses, and more. 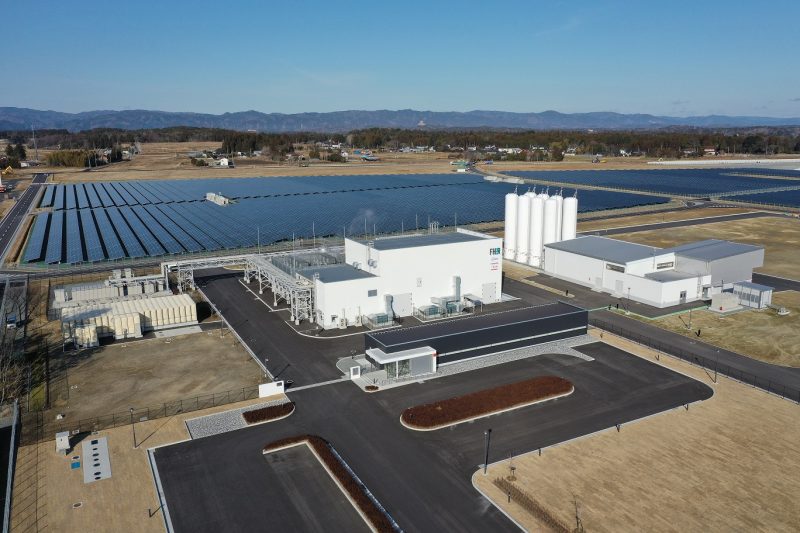 Project Outline
Hydrogen, a concentrated energy source that can be stored for long periods of time and transported over long distances, has emerged as the fuel of choice for a wide variety of applications including cogeneration in fuel cell batteries, and for fuel cell vehicles. Hydrogen supply systems in the future are expected to generate hydrogen from renewable energy sources, and the entire cycle from generation to use is expected to be completely CO2-free.

Japan’s Ministry of Economy, Trade and Industry promotes the adoption of hydrogen in its Basic Hydrogen Strategy published in December 2017, which also targets power-to-gas (P2G) technology for the storage and use of hydrogen-based energy that can be stored in large quantities for long periods of time as output increases. Power-to-gas using hydrogen requires a power grid supply-and-demand balancing function (demand response) to maximize use of renewable energy which undergoes significant fluctuations in output. The technology also needs functions to optimize system operation according to hydrogen supply and demand forecasting.

With sights set on expanding the use of renewable energy, Toshiba ESS, Tohoku Electric Power Co., Inc., and Iwatani Corporation are working with NEDO on a technology development project that aims to establish a hydrogen usage business model and hydrogen sales business model for demand response. The construction of the Fukushima Hydrogen Energy Research Field (FH2R) was completed at the end of February. This hydrogen production facility had been under construction in Namie town, Fukushima Prefecture (Tanashio Area, Tanashio Industrial Complex in Namie-cho) since July 2018 and is equipped with a solar energy-powered 10MW-class hydrogen production unit, the largest-class in the world.

Renewable energy is subject to large output fluctuations, so FH2R aims to maximize its utilization and establish low-cost, Green hydrogen production technology without the use of storage batteries by adjusting to supply and demand in the power grid.

Hydrogen produced at the facility will also be used to power stationary fuel cell batteries and to support the mobility of fuel cell battery-powered cars and buses, and more.

Overview of Fukushima Hydrogen Energy Research Field (FH2R)
FH2R uses 20MW of solar power generation facilities on a 180,000m2 site along with power from the grid to conduct electrolysis of water in a renewable energy-powered 10MW-class hydrogen production unit, the largest in the world. It has the capacity to produce, store, and supply up to 1,200 Nm3 of hydrogen per hour (rated power operation).

To address this challenge, testing will begin to identify the optimal operation control technology that combines power grid demand response with hydrogen supply and demand response, using units of equipment that each have their own different operating cycles.

Hydrogen produced at FH2R will mainly be transported in Hydrogen tube trailers and hydrogen bundles, to be supplied to users in Fukushima Prefecture, the Tokyo Metropolitan Area, and other regions. 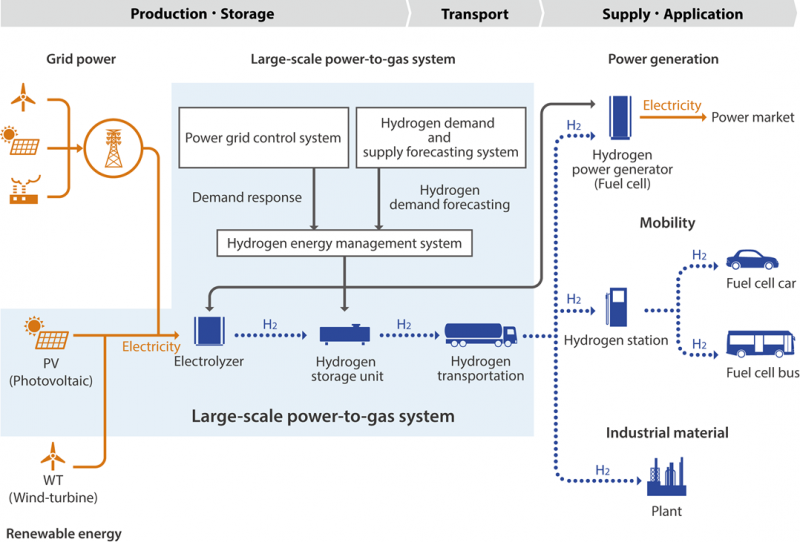