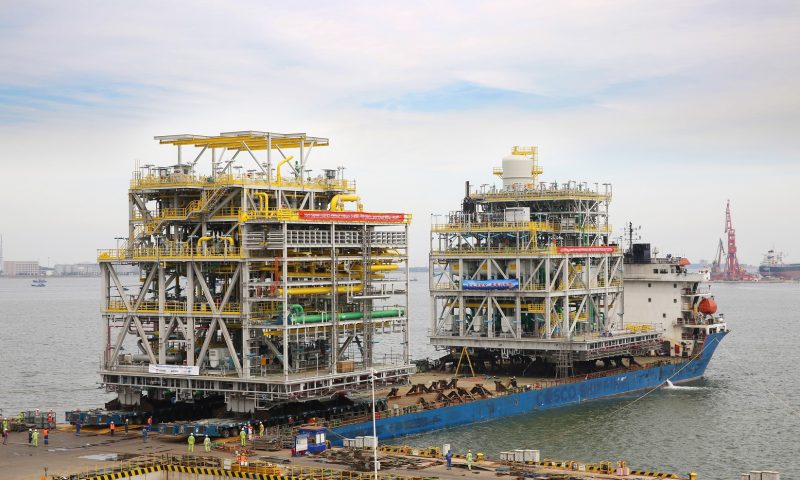 Sarens recently worked with BOMESC Offshore Engineering to load out and transport a series of irregular modules on site at Tianjin, China. Sarens’ role was to load out 17 floating production storage and offloading (FPSO) modules weighing a combined total of 26.341 tonnes, with the heaviest module weighing 2.720 tonnes. The operation was carried out on behalf of project owner MODEC, a global supplier and operator of offshore platforms.

Sarens selected SPMTs for the project because they could synchronously lift heavy loads and would show very minor movement after multi-turning without a coupling block connection (due to grillage space limitations).

The 104-axle lines SPMTs and 4 PPUs were transported to the site via 12 trucks over the course of 1-2 days. Rigging took two days, and the crew worked in a confined space and along a very tight route with a minimum clearance of just 100mm. Successful transport and assembly were possible partly because Sarens had carried out a road survey in advance, accounting for obstacles along the route to save on time and work required.

Sarens also conducted detailed equipment inspections before the operation began. Because the modules to be loaded out had a centre of gravity that was offset to one side, the crew took advantage of the SPMTs’ capacity and made specific trailer arrangements to meet module load out requirements. For example, one group of SPMTs was loaded with up to 42 tonnes.

The operation went smoothly and the modules were successfully loaded out thanks to the hard work and expertise of eight crew members.

“The load-out was carried out safely and efficiently,” says project manager Martin Huang. “Good planning and teamwork were the key to this project. I would like to thank everyone involved.”