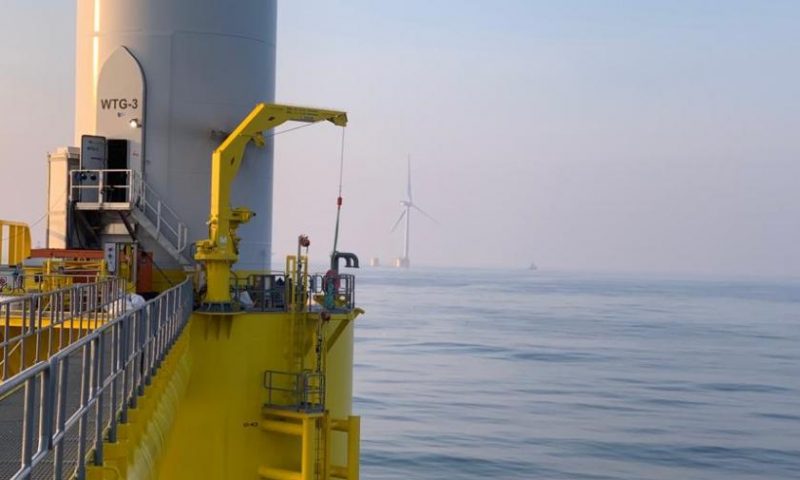 The first platform of the WindFloat Atlantic wind farm, after being successfully connected on 31st December, is able to supply to the grid in Portugal the energy generated by its 8,4 MW wind turbine, the world’s largest installed on a floating platform.

The commissioning of this floating wind farm contributes towards the diversification of energy supply, provides access to untapped offshore wind resource and represents a significant technological leap towards a carbon-free economy.

Windplus is a consortium made up of EDP RENEWABLES, ENGIE, REPSOL and PRINCIPLE POWER.

Lisbon, 02 January 2020: WindFloat Atlantic wind farm is now operational. After the energisation of the 20-km cable connecting the offshore wind farm and the substation of Viana do Castello, the first of the three platforms comprising the Windplus consortium’s wind farm, was successfully connected on 31st December. The other two units will be connected successively, until they reach 25 MW of the WFA project.

The WindFloat Atlantic units –measuring 30 metres in height and with a 50-metre distance between columns– accommodate the world’s largest wind turbines installed on a floating structure of 8,4 MW, helping to increase power generation and drive significant reductions in lifecycle costs. The project took another step forward, once the second of the three platforms that make up the WindFloat Atlantic had arrived at its final destination in the past days. Once fully operational the three Wind Turbine generators making up the wind farm, with their 25 MW of installed capacity, will be able to generate enough energy to supply the equivalent of 60,000 users each year.

The commissioning of this wind farm facilitates access to untapped marine areas and represents a significant technological leap towards shaping a carbon-free economy in Portugal. The WindFloat Atlantic platforms are anchored with chains to the seabed at a depth of 100 metres. They are designed to be transported by standard towing craft, as opposed to bottom-fixed projects which require expensive vessels to be mobilized for transport, and their on-shore assembly helps scale back logistics, financial and environmental costs associated with marine construction. All of these technological advantages make it viable for the project to be replicated anywhere in the world, at a much larger scale.

The project is led by the Windplus consortium, comprising EDP Renewables (54.4%), Engie (25%), Repsol (19.4%) and Principle Power Inc. (1.2%).WindFloat Atlantic project builds on the success of the WindFloat1 prototype, which was in operations between 2011 and 2016. The 2MW prototype successfully generated energy uninterruptedly over five years, surviving extreme weather conditions, including waves up to 17 metres tall and 60-knot winds, completely unscathed.

The platforms have been built in cooperation between the two countries on the Iberian peninsula: two of them were manufactured at the Setúbal shipyards (Portugal), and the third at Avilés and Ferrol shipyards (Spain). The project uses WindFloat® disruptive technology, which enables wind platforms to be installed in deep waters, inaccessible to date, where abundant wind resources can be harnessed.

The partners that have made this project possible include, in addition to Principle Power, the joint venture between Navantia/Windar, the A. Silva Matos Group, Bourbon, the wind turbine supplier MHI Vestas and dynamic cable supplier JDR Cables.